The Human Resources epidemic in IT

The reality of VR: just 3% of Britons to own a headset this year

IT teams work alongside the business to deliver digital transformation projects

Time for organisational deference to die?

The most stressful week of the year for freelancers

MARGINALIA meets with Oblong Industries, the creator of an immersive visual collaboration solution called Mezzanine, to explore how new technology is disrupting the ways businesses conduct meetings, so that decisions are made faster across time zones. 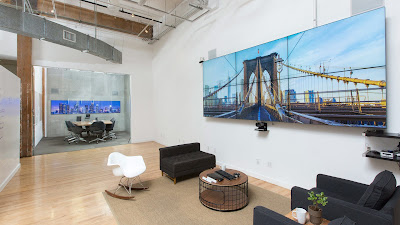 The humble business meeting is a much derided part of most people’s work life. Typically business meetings are criticized as poorly managed, inordinately long and amphitheaters where egos flourish. Of course it would be a gross misrepresentation to characterise all meetings as a waste of time and where only the big beasts in companies have the final say.

But, it looks as though new technology may shake up how employees exchange information, collaborate and generally get things done.

Over the past few years, companies have started to mobilise their communications to solve business problems – from sharing content on online environments to collaborating remotely in the field.

But, the need for employees to have agile and flexible working environments has also driven advances in unified communications. Audio, web and video collaboration services have expanded to meet the demand of organisations to be more responsive in order to adapt and thrive in changing environments. Indeed, today, a meeting in some companies has become much more than a 30-minute group-call. Just think of how easily colleagues can join a conference through their mobile from anywhere in the world. So far, so obvious.

As offices environments become increasingly technology-enabled, it is likely that we will see an up-take in new types of immersive interactions. In fact, interactive screens, virtual reality, and 3D experiences are already part of some workplaces. And fundamentally, they are creating new dynamics between the physical and digital working environments.

New tech companies are responding to the changing needs of business – Oblong Industries is one such enterprise. They are the creators of an immersive visual collaboration solution called Mezzanine. I recently visited the Oblong Industries office in London to experience Mezzanine and explore how it can support workplace collaboration. 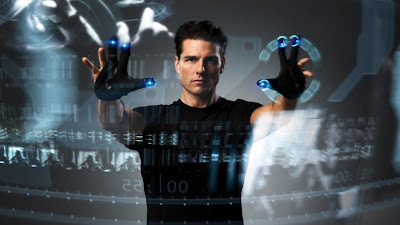 The platform extends the physical office environment and meeting room across screens, devices and geographies. Launched in 2012, it is relatively new. Yet, it’s the end result of many years of development – going back as far as the 1990s when wide spread use of the internet was just emerging. In fact, the founder John Underkoffler conceptualised the interface in 1996. When at MIT, he worked with Steven Spielberg on the now iconic User Interface (UI) for the film “Minority Report”. He then took the concept of a spatial UI into business. The aim was to help teams of people access multiple sources of information for collaboration. Hence, Oblong and the product Mezzanine. 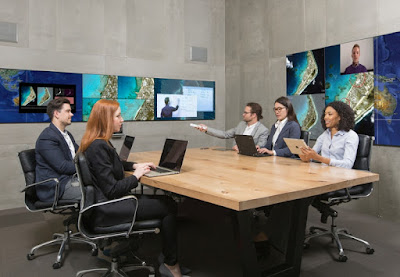 Steve Pryor, a Director of EMEA Channel Sales at Mezzanine, shows me the equipment. We are sitting in an unconventional meeting room which displays three big screens and a whiteboard on the walls. “These working areas use ‘infopresence’ to connect with and synchronise the content across multiple rooms from anywhere.”

What’s infopresence? “Infopresence is a term that describes the experience of being immersed as a group in your vital content and data in a room or across locations,” he explains. In fact, the system links the screens together with a gestural control and via a network of sensors that fit throughout the room.

For example, if someone in the room writes notes on the whiteboard, Pryor can capture them by just pointing at them with a gestural control. He takes a snapshot of the whiteboard and then simultaneously places it on one screen. That way he is sharing the notes in real time with the colleagues who are joining the meeting from other rooms. At the same time, participants from the other locations can share their own content or change the material displayed on the screens. Ultimately, “co-creating the agenda of the meeting as if they were all side by side.”

As you would expect nowadays, the technology supports Bring Your Own Device (BYOD). So, people can access the material, change it and contribute to the conversations from their personal devices. 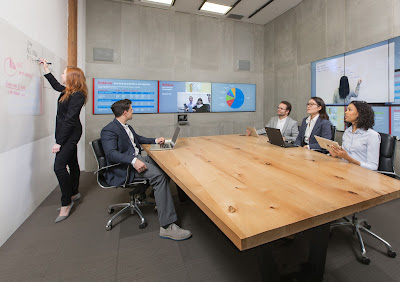 But Mezzanine’s capacity to connect teams does not stop there. The platform allows them to work on many streams of information at the same time – from slide presentations to videos and social media streams, the content can be zoomed in or out. To do that, a tracking system on the ceiling knows when someone is pointing to some specific content or whether their are moving it in and out, or up and down on the screens. Ultimately, the technology becomes a sort of canvas that keeps teams visually engaged and informed.

It would be nice if the technology could also offer a chat function. But, Pryor says “that there are other ways people can capture information, such as sticky notes. Also, we typically answer the questions live. Don’t forget that anyone is participating in the meeting not only visually but also via audio-video track. So you can just ask a question and react to that.” 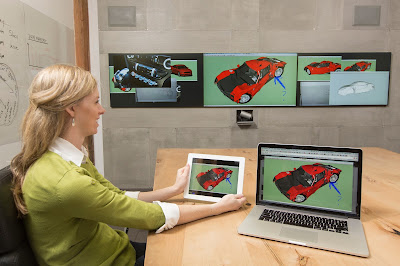 As ever with new technology, it has to deliver business benefits. So, what might the return on investment be? Perhaps, the best way to answer is by examining how some companies have achieved tangible benefits.

The system seems to be particularly successful within the consulting industry, which itself is driven by helping their clients to transform themselves. “Consulting companies are usually innovative and forward-thinking. They are already changing the way they work and seeing the business value.”

Take for example, PwC – one of the big four consulting companies. The Paris offices used the technology to create a conferencing workspace called the Delta Room. The initiative was part of the ‘Innovation powered by PwC’, a program that supports the company’s commitment to exploring future business trends.

So far, the Delta Room has been used to speed up decision making, generate fresh thinking as well as support the strategic thought process with clients. The space provides a gesture-based interface for a 3D experience. And, its interior design easily adapts to different group dynamics and types of meetings.

According to PwC Associate Anne-Christine Marie, after the initial novelty, their clients became used to the unconventional layout and better appreciated the innovative interface. “It gives us a new approach to sharing, going beyond the technology and allowing us to contextualise visual data quickly in co-creating strategies.”

But, there are other use cases including the construction industry – for instance Network Rail in the UK. They are using Mezzanine for planning and decision-making across their signals division. When they have a problem with a track, they send an engineer on the field to live stream the area with a head camera. Other engineers will also provide high resolutions drawings and photos. The signals team access all that live information in real-time from their office. They can then discuss the problem and make more informed, instant decisions. Ultimately, solving the issue quicker and minimisg disruption to commuter trains. 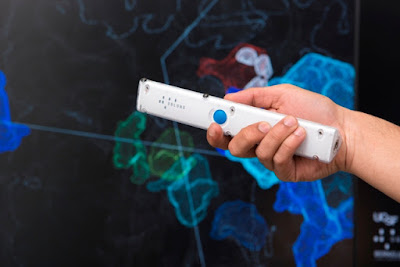 What Oblong proves, is that system providers are doing their job to build a more integrated experience inside companies. Interactive tools have already started to enable effective communications and collaboration among remote offices and teams. And, most probably this area of technology is likely to improve.

Indeed, there is no one-size-fits all. As ever, organisations will find the best solution that reflects their unique needs.

But, increasingly, holding meetings in an immersive environment is a distinct possibility for the future of work. In that scenario, the workplace will feel like a completely seamless experience between the virtual and real environment. So perhaps the humble meeting will be given a new lease of life!